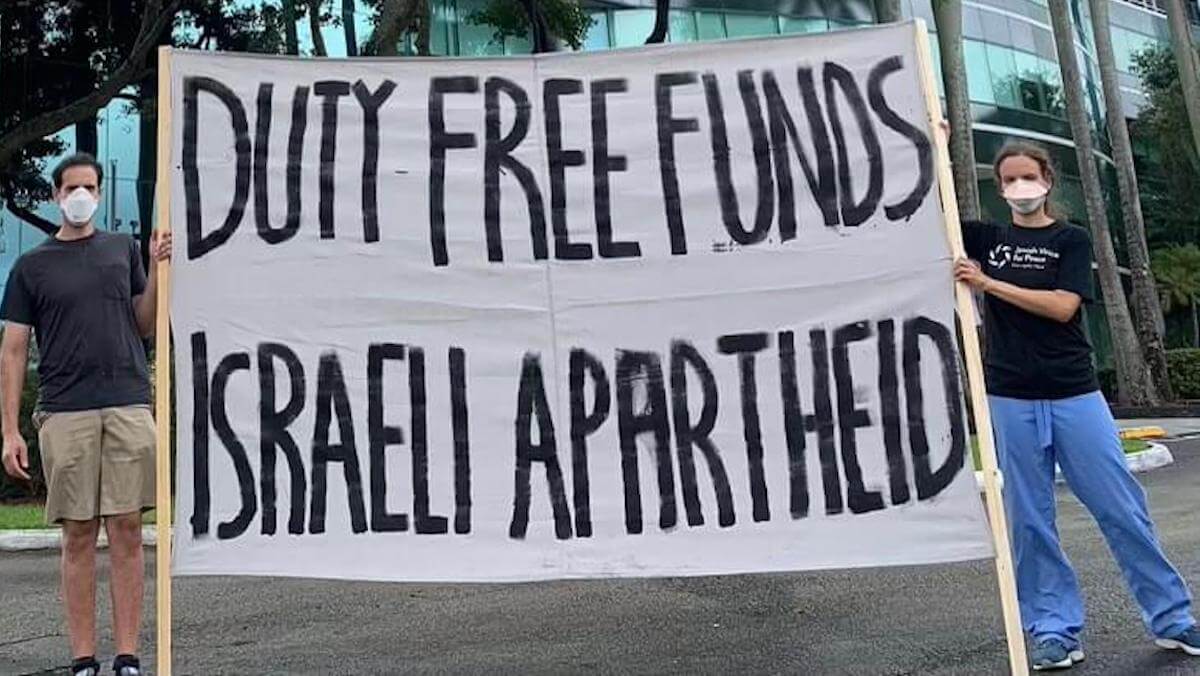 The South Florida Coalition for Palestine is calling for a boycott of Duty Free Americas over the Miami-based company’s connection to illegal Israeli settlements and the forced expulsion of Palestinians.

The Duty Free Americas chain is owned by the Falic family, who operate more 180 stores at airports and border crossings in the United States and Latin America. According to a 2019 AP investigation the Falics have donated $5.6 million to settler groups over a ten-year period. They’ve also lent financial support to racist, ultra-nationalist Jewish groups in Hebron.

Simon Falic, one of the three brothers who runs Duty Free, told the AP that Jews should be able to live in any part of the Holy Land they want. “We are proud to support organizations that help promote Jewish life all over the Land of Israel,” he said. “The idea that the mere existence of Jewish life in any geographical area is an impediment to peace makes no sense to us.”

“The call for boycott of Duty Free Americas is especially important for us Floridians to answer because the owners of  this company are our neighbors — with many of the stores located in this state — and we must hold them responsible and accountable for the millions of dollars they have donated to the ongoing Nakba,” CAIR-Florida’s Central Florida Regional Coordinator Lara Abu Ghannam told Mondoweiss. “The South Florida Coalition for Palestine is answering this call by the Palestinian people by hosting a virtual protest on September 12 to kick off the campaign in Florida — we will not be silent in the face of occupation, apartheid, and ethnic cleansing.”

At the boycott launch event the coalition will be joined by the Campaign to Defund Racism, a Palestinian-led movement that targets “charity” organizations connected to the Israeli settlements.

“Over 200 Palestinian organizations, villages, and community activists have called on the international community to cut the funding to the Israeli settler organizations. What we see from the organizers in South Florida, like al Awda, Jewish Voice for Peace, and Dream Defenders is one of many approaches that will need to be deployed to drive a stake in the spokes of the Israeli squatter movement,” said Cody O’Rourke of the Good Shepherd Collective, which is one of the organizations that makes up the Defund Racism campaign. “Targeting donors, engaging in public affairs campaigns, litigating in the courts, and pushing on Attorney Generals and the Treasury Department to enforce charitable regulations already on the books are all tactics that will have to be taken up and used.”

Earlier this year activists protested Duty Free Americas in front of their Hollywood, Florida headquarters. “As we have seen most recently in the Sheikh Jarrah and Silwan neighborhoods in East Jerusalem, Israeli Jewish settlers are forcibly expelling Palestinians from their homes,” said community organizer Thomas Kennedy at the event. “We are here to protest the funding that comes from the owners of Duty Free Americas and that supports the construction of illegal Jewish settlements in the West Bank and East Jerusalem.”