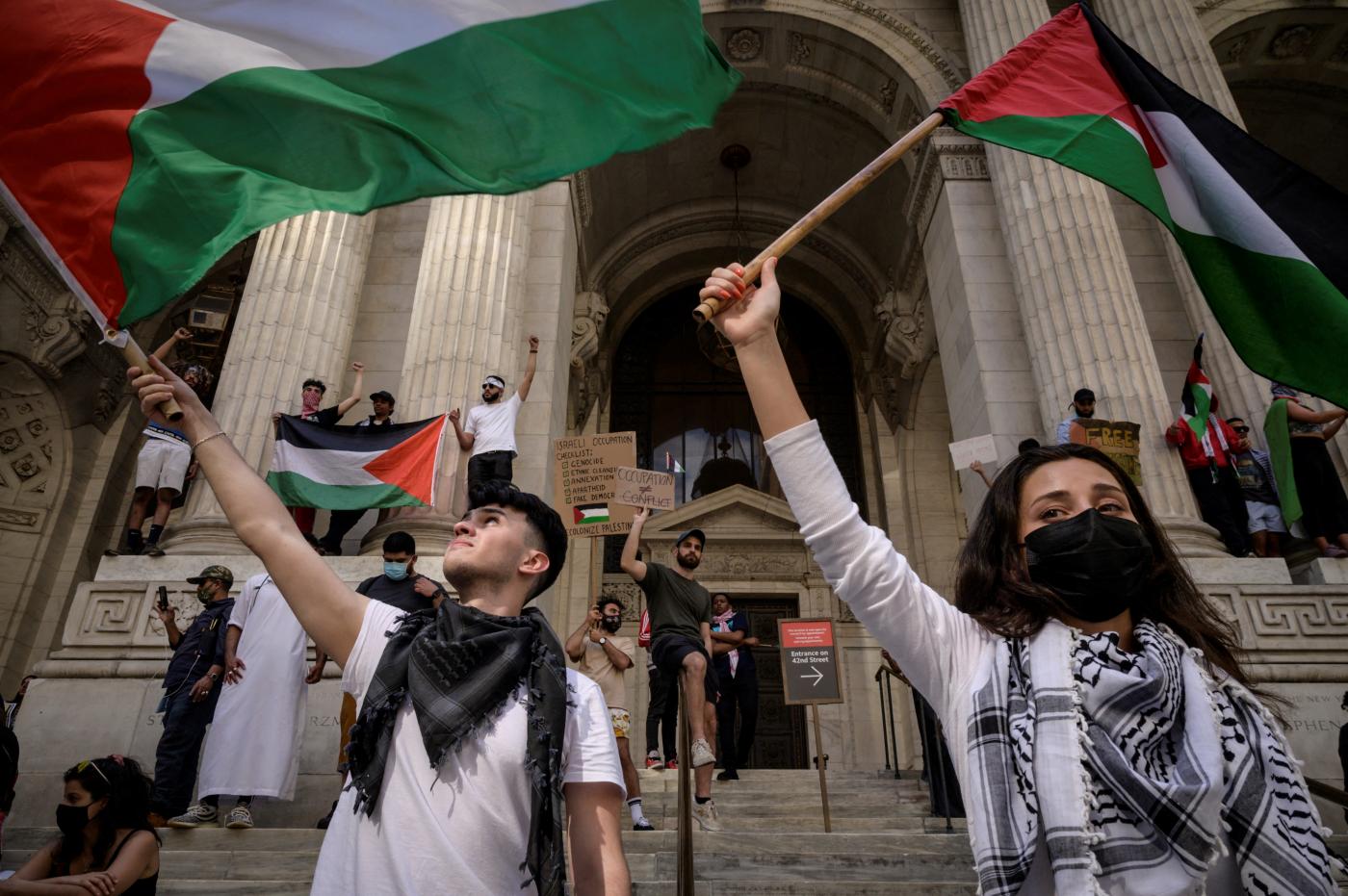 Demonstrators hold Palestine flags and placards as they chant in support of Palestine in midtown Manhattan, New York City on 18 May, 2021 (AFP)

The widely circulated YouTube video of Israeli settler Yaakov Fauci telling Palestinian Muna el-Kurd “If I don’t steal your house, someone else is going to steal it” gave many Americans a stark insight into exactly how ethnic cleansing takes place: it is theft, shamelessly acknowledged as such.

And it comes from a position of total entitlement, one which bears absolutely no accountability for the consequences of one’s act. “I like what’s yours, why shouldn’t I be the one who steals it?”

The fact that Fauci, who hails from Long Island, New York, is financed by a US settler organisation, was also news to many, along with the realisation that this organisation was not the sole such organisation that raises money in the United States in order to sponsor American Jews willing to take over Palestinian homes.

Now, a newly launched coalition, Defund Racism, is shedding light on some of these groups, which funnel millions of tax-deductible dollars every year to settlement projects, at US taxpayers’ expense.

As Mohammed el-Kurd, Muna’s twin brother, explains: “We often speak about settler-colonialism, and we say it, and it’s this term that’s often academic, and we use it to describe what’s going on. But when you come and look at it and how it manifests – how this settler-colonialism crystalises in real life – it is these settler organisations that actively work to displace Palestinians or isolate Palestinian communities from one another in the Naqab, in occupied 48 territories, or in the West Bank.”

Defund Racism is asking New York State Attorney General Letitia James to stop these US-based institutions from claiming they are “charitable institutions”, and therefore exempt from paying taxes. Specifically, they are hopeful that James will revoke the 501 (c) (3) status of each settler organisation’s fiscal sponsor in the US.

Defund Racism’s organisers told Middle East Eye they believe their goal is achievable, because James, who has taken on the National Rifle Association head-on (the NRA is one of the US’s most influential lobbying groups), has a proven track record.

Additionally, by asking James to investigate the abuse of “charitable status”, rather than trying to push a bill through the House of Representatives, then the Senate, and then getting the president of the United States to sign it, the campaign is asking one elected official to enforce laws that are already on the books.

For readers unfamiliar with 501 (c) (3), this tax designation is granted to nonprofit organisations that have been approved by the Internal Revenue Service as tax-exempt, charitable organisations. “Charitable” in turn is broadly defined as established for purposes that are religious, educational, charitable, scientific, literary, testing for public safety, fostering non-professional sports, or for the prevention of cruelty to animals and children.

Having a “charitable” status means that when US citizens or residents donate to these organisations, they can claim their donation on their taxes as write-offs. This is because charitable organisations are supposed to be offering services that the federal or state government would otherwise have to provide, or that residents might have to secure themselves, at their own expenses.

Defund Racism is hoping that James will conclude that these organisations are violating the grounds of their charitable status, since they do not provide a public good to communities in the US. Rather, as the group’s mission statement reads, the campaign to Defund Racism “aims to uncover wrongful acts being funded by these organisations through the use of their charitable status, stop the exploitation of US charitable laws that fund settler extremism and violence, and as a result, the subjugation and displacement of Palestinian communities.”

And they’re hoping Palestine solidarity organisations in the US will emphasise their call.

Defund Racism’s website is highly informative, documenting the activities of many of the “settler rights” groups that fund the expulsion of Palestinians from their homes in Sheikh Jarrah, Hebron, Silwan, the Naqab and more. “The amount of money that just a handful of New York-registered charities dump into the Israeli settler movement is startling,” it says. “From 2014 to 2019, a handful of organisations had $319,921,483 in gross receipts.”

Over 200 primarily Palestine-based organisations and activists have endorsed the campaign.

Bana Abu Zuluf, a member of the Palestine-based grassroots organisation Good Shepherd Collective, told MEE: “It’s not enough to say settlements are illegal. Yes, we need to protest, but protests can’t be just ‘rah, rah, rah’, they need to be connected to tactical structural change. There are organisations that develop and finance these settlements and they have names.”

Defund Racism has partnered with al-Awda New York, the Palestine right to return coalition, as they plan to expose the dishonesty behind the claim that funding illegal settlements is a “charitable” act. In July, outside the New York home of Yaakov Fauci, human rights attorney Lamis Deek explained that the total immunity given the likes of Fauci by Europe and the US was normalising the ethnic cleansing of Palestinians.

“It is a violation of US federal law for Americans to engage in war crimes and genocide,” Deek said. “It is shocking that there is impunity for such open acts of violence, and it is outrageous that New York State actively shelters, promotes and celebrates such violence.”

Ultimately, however, this campaign, like so much activism for justice in Palestine over the years, isn’t just about Palestinian rights. In addition to shining a light on the abuses against Palestinians, this campaign is also about dismantling the ways the US 501 (c) (3) structures also finance white supremacy and other hate groups. Thus the Southern Poverty Law Center, for example, exposed in their 2020 report that:

“In recent years, numerous charitable institutions have been used by donors to indirectly support organisations that use their nonprofit tax status to actively seek funds to promote racism and bigotry. In 2013 and 2014, for example, the National Policy Institute, an organisation started by white nationalist leader Richard Spencer, received two anonymous Donor-Advised Fund (DAF) grants from the Community Foundation for the Central Savannah River Area. Spencer has used the National Policy Institute to advocate for an ‘ethnostate’ that would be a ‘safe space’ for white people.”

A year earlier, in May 2019, the California branch of the Council on American Islamic Relations, had released Hijacked by Hate: American Philanthropy and the Islamophobia Network, a report mapping the flow of funding from tax-exempt foundations to anti-Muslim special interest groups.

As Defund Racism says in its toolkit: “This campaign to decolonise the US nonprofit system is one way we can connect movements of resistance. It’s one way we can combat antisemitism and colonialism simultaneously in meaningful ways that can result in structural changes. We call [for] an end to this funding of racism – all racism. Are you in?”